Honestly, I’m not good with moving places. I wish to avoid it. But, still.. 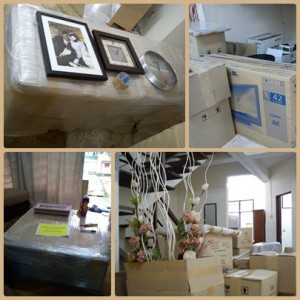 Finally, I’ll live together with my Hubby in KL. For that fact, I’m HAPPY! Since we got married in May last year, we’ve been staying apart for 7 months; he works in KL, while I work in Kuantan. The routine was: He drives to Kuantan right after work on Friday. And he’ll reach our house in Kuantan at around 930pm. And on Monday, he would drive to KL right after Subuh prayer (at about 6.00am) and reaches his office in Batu Caves just in time to punch-in before 9.00am. Besides so much energy and $$$ costs spent, we had to endure emotional turmoil when we needed to be separated again on Mondays. The same thing happens every week for almost 7 months. I never thought being weekend couple that challenging.

We decided to hire a professional mover to help us with the moving process. We surveyed some companies from the internet. We contacted some, and they gave us the quotation. Finally, we ended up with Trio Movers. I heard of their good reputation after Kulliyyah of Pharmacy (KOP), IIUM hired them for a huge move from the Kulliyyah of Medicine (KOM) building to the grand, newly build KOP building; just beside KOM.

My Hubby first sent pictures of the stuffs and furniture in the house to the company representative for easier estimation. Later he came to the house in Kuantan for on-site survey. We had to choose the moving date. Initially, we planned to move out of the house at the end of January. But, I need to settle down ASAP as my PhD schedule would be quite tight on Feb. Next weekend (Jan 15th) would be my sis’s wedding in Kemaman. And two weeks after that (Jan 29th) would be the reception at her husband’s side at Putra Heights, Subang Jaya. Arrghh.. my weeks are full! And my supervisor wanted me to finalize my proposal by February. Oh Lord..Busy January

On Thursday (Jan 6th), we went back to Kuantan after Maghrib prayer. Arrived at nearly midnight. My Hubby must be very exhausted of driving after work today. I did some packing of my personal stuffs and got in bed at around 2.00 to 3.00 in the morning.

On the next day, Friday (Jan 7th), Trio Mover sent 3 staffs to do the packing and they finished it within four hours! We let them finished their job in Kuantan and waited for the lorry to transport the stuffs to KL. My Hubby and I dropped by at my in-laws house in Sekilau before we drove back to KL after Maghrib (we had to drive two cars since I left my car in Kuantan last week). What a tiring day! 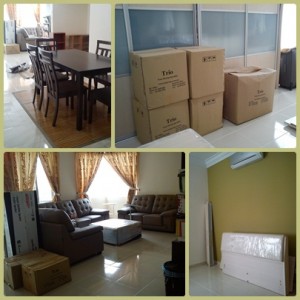 And on Saturday (Jan 8th), they started to move our stuffs into our condo in Taman Melati, KL at around 10am. They finished 3 hours after that. They assembled huge furnitures (bed, wardrobe, etc) and left us with many boxes of our personal stuffs (clothes, handbags, shoes, glassware, kitchenware etc).

The ultimate result: Both of us were DEMAM the day after that. Thank God it’s Sunday..